Between fake accounts and acquisition tactics 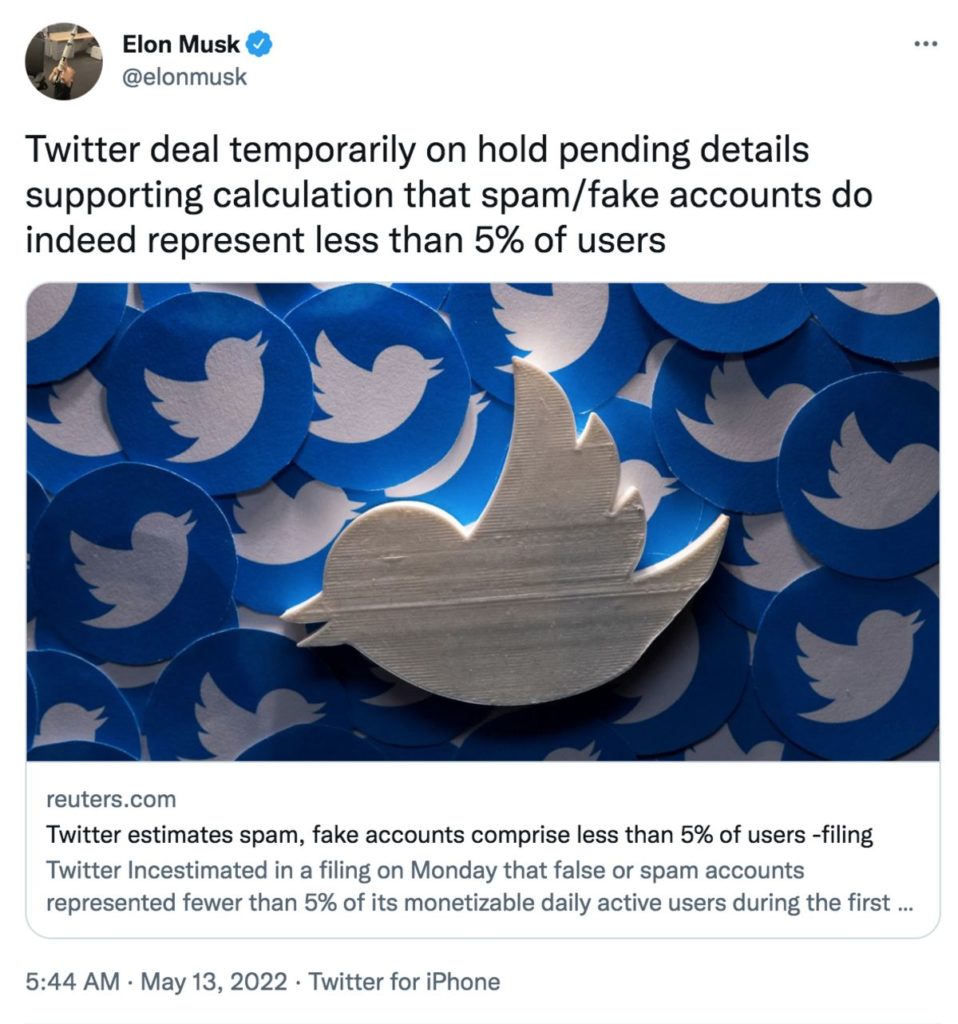 Between recording this month’s vidcast (“A 44 billion tweet…”) and writing this blog (May 14), Elon Musk announced that he was reconsidering the acquisition of Twitter because he feared that “fake accounts” represent more than the 5% announced by the target.

As a result, Twitter’s share price lost around 20%, dropping the market capitalization from $40 billion to $32 billion. On the other hand, the announcement of the possible withdrawal allowed the price of Tesla to catch up with a (small) part of the 270 billion dollars evaporated… The price recovered 6% at the announcement of Musk, but it had lost about 27% …

So, acquisition tactic or real questioning?

The vidcast focuses on the economic dimension of the offered acquisition price and its possible financial motivation. The conclusion is that you have to be quite optimistic about the evolution of Twitter’s EBITDA to obtain a barely correct ROI.

If Elon Musk withdraws his offer, he will have to pay a billion-dollar penalty, but what is that compared to raising the value of the 16% of Tesla he still owns? All it would take is a 0.8% increase in Tesla’s price for the capital gain to repay the penalty.

On the other hand, there is a legal aspect which can make it possible to modify the financial approach. The Ecademy film devoted to the acquisition of Tiffany by LVMH (June 2020) gave us the opportunity to discuss the Material Adverse Change (MAC) as a possibility of withdrawing without penalty from an acquisition in the event that exceptional circumstances significantly affect the value of the firm. In practice, a court decision ruled in favor of the buyer (Akorn vs. Fresenius, Delaware 2018). The acquisition of Tiffany had obviously been disrupted by the Covid-19 epidemic. In the case of Akorn, the EBITDA had lost 86% between the signing and the mobilization of the courts for reasons specific to the company. The pandemic is a systemic cause and, ultimately, LVMH and Tiffany agreed on a price drop to complete the acquisition (and avoid the courts…).

The problem mentioned by Musk is indeed specific: the number of fake accounts and its estimation in regulated communication. “We have performed an internal review of a sample of accounts and estimate that the average of false or spam accounts during the first quarter of 2022 represented fewer than 5% of our mDAU during the quarter” (source: communication of Q1 2022 results by Twitter ).

The threat from the MAC therefore seems serious and could allow Elon Musk either to withdraw, which would probably have a fairly positive effect on his Tesla shares but at the cost of a significant capital loss on the 9.2% of Twitter shares which he has held since the beginning of April, or to negotiate a substantial reduction in the acquisition price, which would increase the ROI but without solving the Tesla problem…

In the meantime, Bill Gates has confirmed that he shorted $500M worth of Tesla stock, which must have earned him around $100M in a month, there is no such thing as a small profit!