Danone: are the new requests of activist’s shareholders legitimate?

The phenomenon of more militant shareholders complicates the life of the agri-food company. 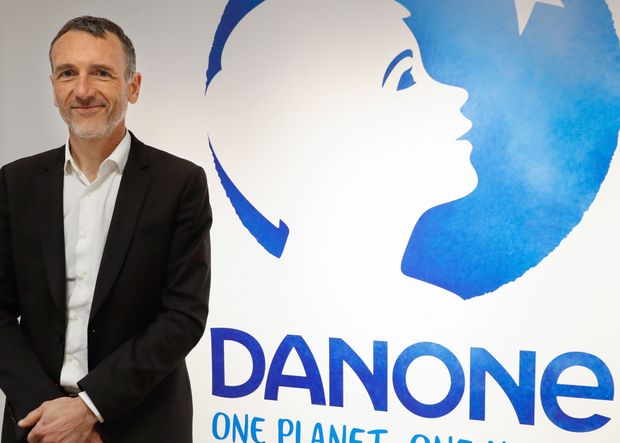 It is the fourth time that the French food product specialist is confronted with such a challenge by an activist shareholder for the past 8 years. With his fund Trian Partners in November 2012, Nelson Peltz already took 1% of Danone and asked for cost cuttings, margin improvements, and additional buybacks. This event was only the first flavour of the activist’s phenomenon as, after 7 months and a stock return of 15%, Trian Partners sold its shares. In 2017, another activist shareholder called Corvex Management acquired a minority stake (0.8%) without requesting aggressive management changes nor operational or cash returns targets. The activist event from Bluebell Capital one month ago looked like a more typical aggressive approach already, which would require a strategic and credible response from Danone. Indeed, Bluebell Capital’s approach by confronting the TSR performances with its peers, asked for the current CEO’s departure, and to change the governance in an official letter to its board of directors. The second activist’s event in one month, by Artisan Partners is pushing Danone’s top management to the wall of reality. Are the arguments of the activists legitimate? 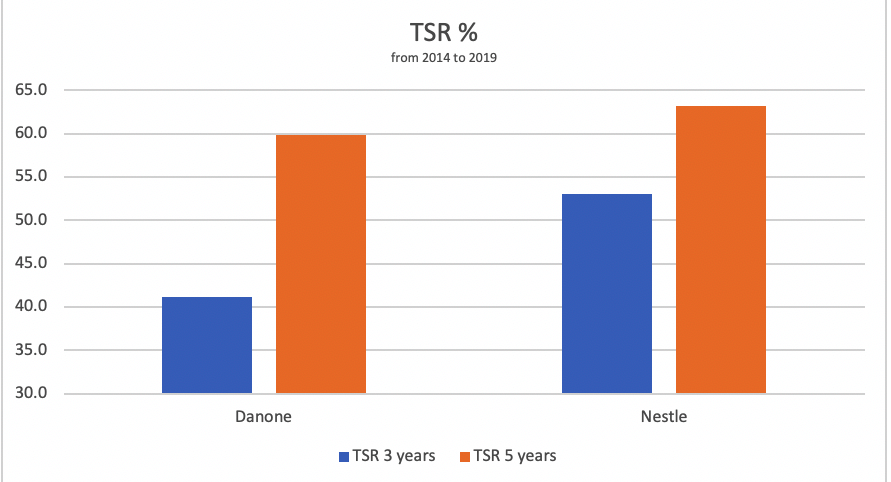 From a Total Shareholder Return, compared with Nestle, the comparison clearly shows an underperformance. Nestle has been facing activism pressure from the activist Third Point, which has led to stronger cash reallocation to shareholders. As Danone was protected from such activism pressure up to one month ago, both recent activists have identified the gap and the opportunity to deliver better returns, even more after the Danone share’s recent drop in 2020.

Confronting Market-To-Book (MTB = Enterprise Value / Capital Employed) and ROCE always provides relevant information. The MTB of a zero-cash flow-growth firm should be its after-tax ROCE divided by the WACC. During the last 6 years, Danone showed a stable ROCE (12%-14% range) which pays the WACC twice. With a MTB at 2 it demonstrates that investors don’t foresee any potential free cash-flow growth.

With current ROCE at 21%, Nestlé would deserve a higher zero-growth MTB, i.e. 3. As it actually goes beyond 4, investors anticipate positive FCF growth.

Then, Nestlé favorably compares with Danone on 2 aspects:

During an activist’s event, the probability that the CEO of the target company leaves increases significantly. According to different studies, the likelihood of CEO turnover one year after the event raises from a natural rate of 8% up to 27% 1,2. If the activists get a seat at the board, this probability goes up to 55%3. The fact that Bluebell Capital requested officially to change the CEO is typical of an intrusive tactic of an activist shareholder. The activism industry knows that to increase the potential pay-out of their intervention, focusing on TSR’s improvements only, does not guarantee success. Returns to shareholders increase with outcomes such as partial or full take over or board changes and are flat with TSR requests only4. With the fact that both activists are requesting a new chairman, the probability that board changes occur on short notice, lead by the golden leash of Artisan Partners Jan Bennink, is significantly higher. In addition to this, Bluebell Capital and Artisan Partners are materializing existing doubts of financial analysts who already questioned the “purpose focus” of the company5,6.

The Activist Investing Annual Review 20217 has highlighted that, despite a lower activism intensity in 2020, activist shareholders would come back in 2021 to firms which have disclosed structural weaknesses to face the pandemic. The same review, precises that activists will be less willing to compromise with the top management of target companies. Danone’s weaknesses, illustrated by the “governance issues, the inefficiency of capital and resource allocations” became visible for any outsider, and as a consequence, became an easy prey for activists. As Warren Buffet says, only when the tide goes out, it reveals who has a bathing suit. For the recent activists, Danone did not have a bathing suit, and they saw the opportunity to move in, in both cases, requesting a new governance.

Emmanuel Faber recognized in 2017 that “we will continue to see activists in this industry” 8. Therefore, it is not surprising that more intrusive and challenging activist shareholders are stepping in Danone. The company, with lower TSR than its peers (share price going down by 25% in 2020), lower performance and lower credibility, and its quiet Corvex activist already on board, became an obvious target.

We cannot discard that important changes will happen within the next 12 months as the activist industry knows that it is with structural outcomes that activism increases value. Bluebell Capital and Artisan Partners have played with traditional cards of activist shareholders, questioning the shareholders’ return performances and the current management’s ability to close gaps versus peers. The very challenging year of 2020 that Danone has faced, with growth performances much lower than its peers in key categories (such as Dairy and Waters), gives a legitimate window for activists to request drastic changes. The recent effect on the stock price shows that the market accepts and believes in activists’ opinions, more than in the restructuring announcement of Emmanuel Faber on the 23rd of November of 2021.

Therefore, the current CEO’s departure in the coming months has a significant probability, as his response towards the activists will now be read with scepticism. And it cannot be underestimated that the company would be partially or fully taken over.

5 Andrew Hill, The limits of the pursuit of profit, Financial Times, September 2019